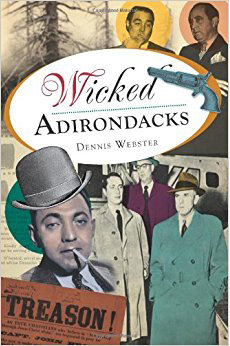 While the Adirondack Mountains are New York's most beautiful region, they have also been plagued by insidious crimes and the nasty escapades of notorious lawbreakers. In 1935, public enemy number one, Dutch Schultz, went on trial and was acquitted in an Adirondack courtroom. Crooks have tried creative methods to sidestep forestry laws that protect the flora of the state park. Members of the infamous Windfall Gang, led by Charles Wadsworth, terrorized towns and hid out in the high mountains until their dramatic 1899 capture. In the 1970s, the Adirondack Serial Killer, Robert Francis Garrow, petrified campers in the hills. Join local author Dennis Webster as he explores the wicked deeds and sinister characters hidden among the Adirondacks' peaks.